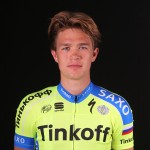 Juul-Jensen claimed the Danish National Time Trial championship title on Thursday last and while being congratulated by his team boss, Oleg Tinkov, on Twitter it was revealed he may leave Tinkoff-Saxo at the end of the year.

By far his biggest win in his short Pro career hopefully Tinkovs tweets are just a negotiation ploy, although we are sure many teams would be interested in an all rounder like Chris.

A member of Sorrento until moving to Denmark at age 16, Chris has been riding for Denmark in recent years at U23  level,Chris has been with Tinkoff Saxo since 2012.He celebrates his 26th birthday next Monday July 6th.

We hope he wins again soon in his new Danish skin suit.