13 July 2019 10:36 pm | Comments Off on Danny O’Shea Open TT Results
A tough northerly wind on the outward leg led to a tough split in the Danny O’Shea memorial 10 mile TT this morning near Brittas Bay in Wicklow.
The winner Con McDunphy(CC Nogent/Oise) taking overall victory by a margin of 17 seconds from Paul Kennedy(Foran CC) on this testing rolling route.
The defending champion and locally based rider Greg Swinand was a further 15 seconds back in third place. 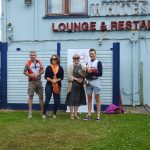 The event in memory of the distinguished Cycling Ireland Official Danny O’Shea and run by his club Sorrento CC has drawn many top riders in its short history due to the fast nature of the course south west of Wicklow town.
Full Results