Out of Wicklow at the Giro 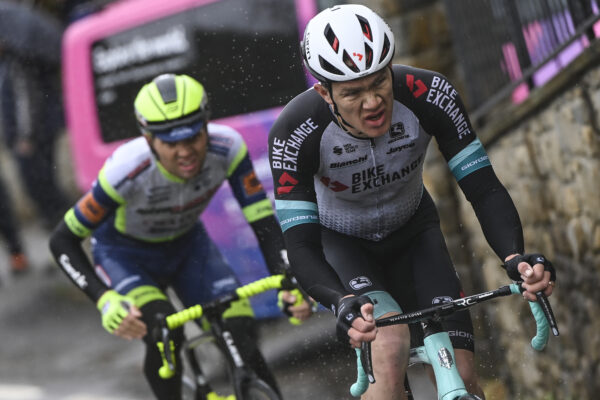 Out of Wicklow: Chris Juul Jensen, the Danish rider who was born in Ireland and spent his childhood in Wicklow, on the attack in the finale of yesterday’s Giro stage 2 with Rein Taaramäe just behind him (Photo: Fabio Ferrari)
Chris Juul Jensen, the Danish international who was born in Ireland and grew up in Co Wicklow, spent stage 4(Tuesday 11th May)  of Giro d’Italia off the front ay only to see his bid for glory ended with less than 5km to go.
Born in Ireland to Danish parents who emigrated to Wicklow in the 1980s, he followed his father and brother into mountain biking with Sorrento CC. As a schoolboy he was good enough to get a place on the Irish ream for the Youth Olympics in Italy in 2005.
By the time he was 16-years-old he decided to go to Denmark for transition year at cycling school in Aarhus – on Denmark’s Jutland mainland – where developing in the sport was given the same priority as studying. That led to him declaring for Denmark.
He turned pro in 2012 for Saxo-Tinkoff after spending four seasons at Danish Continental team Glud & Marstrand-LRØ Rådgivning. His biggest wins to date include overall victory at the Tour of Denmark in 2015, the Danish national TT title the same year and a stage of the Tour de Suisse in 2018.
The 31-year-old is now riding for Team BikeExchange and got clear in the 25-rider breakaway on the Giro yesterday. The group had a gap of seven minutes at one point on the wet and cold 187km stage from Piacenza to Sestola.
“It was certainly a harder day than I expected, but I also did not expect to be in a position to fight for the stage win,” Juul Jensen said.
“It was a hectic start, many attacks and wet conditions. After 30km I was away in a group of 25 riders and made sure to spend as little energy as possible. Our only goal was to have a rider represented in any big groups.
“As the stage rode into the mountains, I stayed close to the front and was well positioned on the descents which resulted in me opening up a good gap with two Wanty riders 50km from the finish.”
Juul Jensen continued: “From then on it was a matter of managing my energy as I knew there would be a chance of riding for the stage win as Rein Tararamae was mainly interested in taking the pink jersey.“Unfortunately, the last climb proved to be too hard and our gap too small for me to pull off the win. Obviously, I’m disappointed; I would have loved to have taken a win for the team so early in the Giro.
“Nevertheless, I gave it my best effort, such is life and cycling that you often lose more than you win, but that doesn’t mean you give up and don’t try again the next day.”
Juul Jensen winning the overall at the Tour of Denmark back in 2015 when riding for Tinkoff-Saxo
After the first categorised climb of the day yesterday Juul Jensen flew down the descent and broke clear of the breakaway with Rein Tararamae and Quinten Hermans, both of Intermarché-Wanty-Gobert Matériaux. Hermans later dropped back, leaving Tararamae up front, going for the leader’s jersey, and Juul Jensen with a stage win on his mind. However, on the last climb, deep inside the final 10km, the two leaders were caught by the remains of the breakaway.
In the end Joe Dombrowski (UAE-Team Emirates) pressed on to win the stage from Alessandro De Marchi, with the Israel Start-Up Nation rider taking the race lead for his efforts. Juul Jensen just about held off the best of the general classification riders to take 10th on the stage, some 1:36 down on the stage winner.