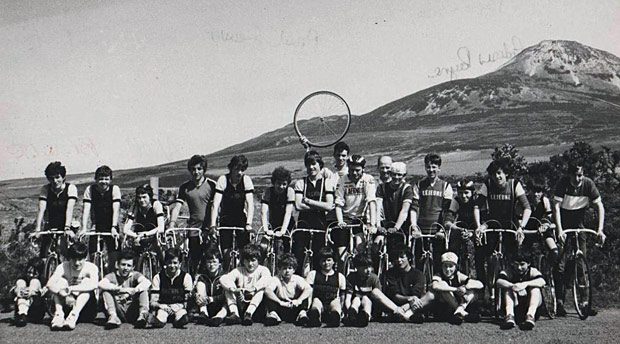 Inspired by the works of cartoonist Gary Larson the Far Side was a whimsical look at life from an altered perspective. This Charimans Challenge is likewise looking at Wicklow not from the perspective of the Wicklow Masif but rather the hills to the East, many of which are ignored in favour of our their more epic Westerly counterparts. The group of climbs comprises 7 climbs of varying difficulty and length but are not generally climbs that due to their location would be covered in club spins, you might go down them, like the back of abwood, but rarely up them.

There are a number of options to get to the top of the Little Sugarloaf if approaching from the south so we have included just one option from Delgany Village. Alternatively you can approach from Kilmacanogue as per the second link below

Theres only one way up this one! Starting in Delgany village head up past the car park of The Delgany and continue all the way to the top. You get a nice breather in after the first initial pull.

Timore is probably better know to people by the name Abwood as this is generally the route we take to get there. However for this challenge we approach it from the opposite side and if you’ve not done it before you could be in for a surprise! Approach from the

Just around the corner from the start of Timore is the start of Kilmullin Lane also known as Butterfly Farm or Goose Duck Lane. It starts just to the East of the N11 and continues up to a T junction on Dunran.

I think with this one finding it is the biggest challenge. It starts just West of Blainroe Golf club so I’m sure if you are stuck you could always ask for directions.

The Furthest South of the Far Side climbs is Castletiemon. This one has a lovely bite at the very start. Keep left at the fork and follow the road up and north heading back twoards Wicklow town. It looks all downhill from here!